On a recent visit to my parents, my Mum mentioned she wanted to clear out some old stuff and asked if I would like to take her sewing machine. A little surprised at this diversion from our usual ‘How are you?’, ‘Do you need any shopping?’, ‘How’s Dad?’ conversation, I said ok so long as she was sure she wanted to get rid of it.

Driving home with the sewing machine in the car, I thought back to being very small and looking up at the dining room table on which my Mum was ceremoniously unveiling the machine for the first time; it was shiny and gleaming with many mysterious wheels and dials and buttons. A thing of wonder to my young eyes, I must have reached with interested little hands. I was told sharply, ‘don’t touch’.

I stood back a bit to watch my Mum connecting the foot pedal and plugging in to the wall socket - It was an electric machine! Her mum (my grandma) had only had a hand-cranked machine. I remember seeing the reels of cotton and my Mum picking one, setting it on the holder, and delicately poking the thread through cryptic holes, under and over, and around a springy thing, and down to the glinting needle. I wanted to stay and see what how it would all work, how it would stitch the fabric. Silently, I stepped a little closer to see … and was promptly taken to bed.

In the morning, I went to the table but the machine was gone. It had been put away. I wasn’t to see it working again.

When I returned home and brought Mum’s machine in from the car, I removed the cover cautiously – and there it was. I hadn’t laid eyes on it for more years than I could remember but it was unchanged even though it now seemed heavy and silent, also more mundane, the dials more knowable, and the technology very definitely dated. I gave it a dust and examined the odds-and-ends in the little compartment, I even found the original guarantee card.

Whilst the sewing machine wasn’t something that I was ‘allowed’ to be interested in, the irony is that in the end my Mum never really used it that much either. Chatting about sewing, and dressmaking in the intervening years, my Mum admitted she’d tried making a dress from a paper pattern once but hadn’t enjoyed it, that she’d only got the machine because ‘everyone had one’ at that time, and after that first try she only used it a couple more times to do some alterations. So it turns out my Mum didn’t enjoy doing something that was expected of her, she didn’t want to do what her peer group were doing.

Looking back, I wonder if she might have had more fun learning together with her young daughter, that is if she’d known she had a young daughter, but neither of us knew that back then.

For my part, the sewing machine was yet another thing to feel guilty about. From the earliest age I can remember, there were myriad ‘things’ that I wasn’t supposed to say or do or be. Many unspoken but tacitly enforced. Equally the many things I was supposed to do, say and be weren’t me either. I came to see myself as ‘not right’, a mistake. I had no other words to help me express myself, there was no internet, and no Google and I had no one to confide in. But even as child I knew my truth and I learned the world was hostile to me. So I learned to hide me. I hid by keeping quiet, by keeping away from other people. My Mum always did wonder why I preferred learning from instruction manuals and text books, it was because they never said whether or not I was allowed to join in, they didn’t judge me. Whether I wanted to learn sewing or learn welding, read fiction or study microbiology – the books didn’t judge me as an individual or gate keep my personal validity, even if one of my vintage Singer sewing manuals is notoriously riddled with Atomic Age misogyny: 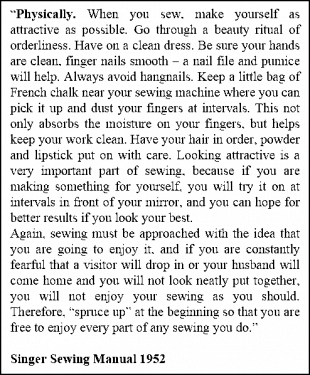 I went on to study biology and research environmental microbiology at university. But even learning that the natural world is far more diverse and gloriously imperfect than I could ever have imagined still didn’t help me in the human world, the workplace was still a hostile place for me. I kept hiding me, but ultimately hiding is harmful – my own critical point came about ten years ago, the cumulative pressure of not being me, brought me to face a stark decision, either be me or don’t be.

Stepping back from the precipice took a while and all my meagre savings plus a few more ups-and-downs. In the process I became distanced from the few people that I thought I knew and it cost me my career as a lead researcher in sustainable agriculture. But I was lucky, very lucky. With the aid of the internet I was able to find resources and support, and the waiting time for a first NHS appointment was a mere three months (waiting times are now approaching four years at some clinics).

At the Environment Agency I found a new career and an employer that is not only super inclusive on paper but works hard to live its values with just as much passion as it pursues its aim of creating a better place. The EA works really hard to go above and beyond the bare minimum required for compliance with the Equality Act.

There is after all no limit to kindness and inclusivity beyond that which we set for ourselves.

And this is all the more important right now. We’re at a time when intolerance is rising and mainstream media is regularly carrying dog-whistle misinformation that portrays difference and diversity as a threat. The upshot is a surge in UK LGBT+ hate crime (even allowing for increased levels of reporting) and a decrease in prosecutions.

Online, Galop's 2020 hate crime report shows that 8 in 10 LGBT+ people have experienced online abuse and half of those targeted had experienced hate more than 20 times. The impact is that social media, the way we all now connect with each other particularly in this year of Coronavirus restrictions, is not a safe space for trans people, and I have experienced this personally.

Face-to-face, the emboldening of bigotry and hatred has manifested as an 81% increase in transphobic hate crime in 2018/19, and in the last year ONS figures show that transgender people are twice as likely as cisgender people to be the victims of crime in the UK.

Looking down on my Mum’s sewing machine, now on my dining room table, I put its cover back on and carefully put it away. It was time to get my own sewing machine out and finish the dress I’m currently working on (without my ‘powder and lipstick’ and without my hair ‘in order’!). As I lined up the fabric to sew one of the side seams, I spotted I’d left the old guarantee card on the table, the purchase date was still readable; April 1969. I was four years old when I first saw my Mum’s sewing machine.