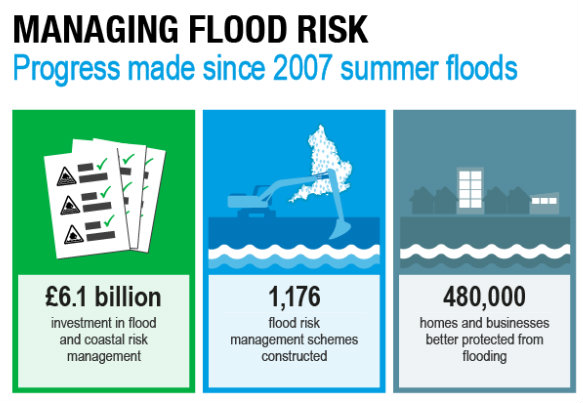 On a wet morning in summer 2007 I set off to Birmingham to discuss – of all things – drought planning for water companies. Throughout that year I had been busy working on the Environment Agency’s management of water resources.

I remember the morning well. As I left home I saw my youngest had abandoned his play bucket by his sandpit once again. But the rain had already started so no time to tidy and I hurried on. Once at the train station the heavens had opened and all the trains had been suspended – the irony of flooding causing me to abandon my drought plans. We would eventually see an unprecedented amount of rainfall between May and June – the wettest period since records began in 1766.

I headed home and once again passed my lad’s play bucket – it was already full - with water sloshing over the top. This could be serious I thought.

What unfolded 10 years ago was some of the most devastating and widespread flooding this country has seen with loss of life and 55,000 homes flooded. But since then, we have taken huge strides to help reduce flood risk to communities by investing more than £6 billion and building over a thousand new flood defences which better protect 480,000 homes and businesses.

The 2007 floods were a game changer with Sir Michael Pitt’s review leading to a new Floods & Water Management Act, improved oversight of flooding and a new era of technological advances in flood risk.

When working on flood response we often talk about the chain;

Since 2007 we have invested significantly in this chain as overall response to a flood is only as good as the weakest link.

On detection we now have a river level monitoring service which covers 36,000 kilometres of rivers in England all of which you can see here and have recently jointly upgraded the nation’s weather radar network with the Met Office. 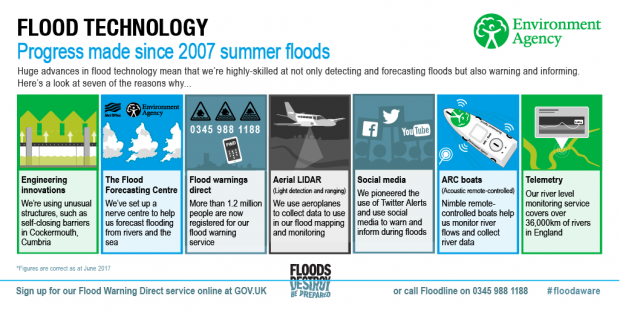 One of the major changes after the 2007 floods was in the world of flood forecasting. In 2009 we created the national Flood Forecasting Centre (FFC), a partnership with the Met Office. The FFC, for the first time, brought together the experts who predict the weather with those who know how rivers respond. This has led to a five day flood outlook for the whole nation 365 days of the year.

In flood warning we have introduced new, clearer flood warnings codes and only last month a new flood warning system was launched which can now warn 1.2m people of risk of flooding at the touch of a button. We have also developed the communication channels we use to warn as the public as social media grows – and in December 2013 we were the first organisation in the country to use Twitter to send a severe flood warning through their Twitter Alerts service.

Finally, on response we have significantly increased the kit and people we can use to help protect those at risk of flooding. We have invested in new kit including 40 km of temporary flood barriers, 250 high volume pumps and 4 incident response vehicles.

But it’s not all about technology

All of this investment in new technology means we are among the world leaders in the realm of flood forecasting and warning – but it’s not all about technology.

One of the major elements of Sir Michael’s review into the 2007 floods was the need to put the community back at the heart of decision making in flood management. We’ve made real progress there too with how we involve communities in our flood schemes and catchment plans such as the Cumbria Flood Partnership but in this area we still have a long way to go – we all have a role in tackling flood risk. And this means that you too have a responsibility to take action. Check whether you live in an area at risk of flooding and find out what steps you can take to reduce it.

Climate change means we, and communities and partners, are going to have to constantly improve how we tackle floods. If our thinking doesn’t change as quickly as the climate then we have a problem – but I’m confident that more innovation and partnership will help this country become more resilient to flooding.