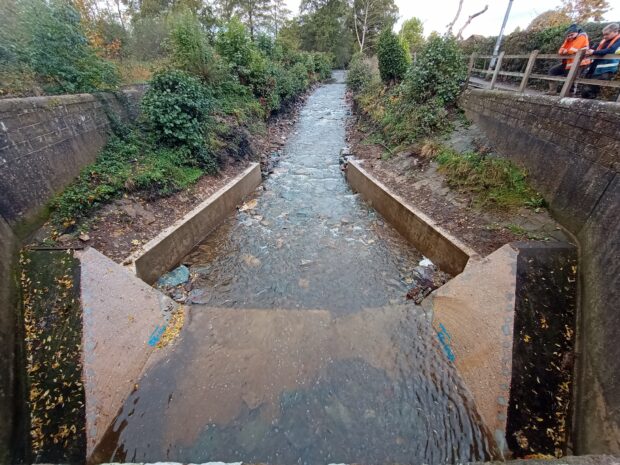 While stock of Atlantic Salmon in some English rivers has been struggling in recent years, Derbyshire’s River Derwent, which flows into the River Trent, has seen stock steadily improving.

Over the last 10 years, the Environment Agency and partner organisations have worked hard to open-up our rivers to salmon and other fish by building fish passes and removing obsolete barriers to migration. These fish passes have enabled adult salmon and other species to swim more freely and have greater access to the habitats they need to spawn.

Snake Lane weir, standing at 2.6m tall with an almost vertical wall that was built in the 1970s on the site of an older structure at a former corn mill, stopped access up the river to all fish for centuries. It restricted the number of fish species above the weir to 8, while below the weir we had 16 fish species, so we knew that removing this huge obstacle would increase the migration of fish upstream.

In 2018, we approached the Wild Trout Trust for help in removing the weir and creating a pass to enable fish to migrate. The trust is a charitable organisation that provides practical advice and delivery of hands-on habitat improvement projects.  Our previous attempts at addressing problems with the weir had failed and so we needed fresh sight of the issue, with a pragmatic and ‘can do’ attitude.

Working with The Wild Trout Trust made the impossible become the possible. They were able to understand the issues and constraints, and build a partnership of design consultants, structural engineers, archaeologist, ecologists and an excellent civil contractor: an A-Team who could deliver while also securing the support of landowners and the local community.

In July 2022, four years of hard work was brought to life when local contractors A&V Squires rolled onto site. And, while all the county was faced with low rainfall and a drought on the horizon, diamond cutting experts worked alongside excavators to deliver our ambition of removing the barrier and replacing it with a ​‘rock ramp’ fish-pass.

In October, the project was finally complete and open for business. Opening-up the River Ecclesbourne for all fish, including Atlantic salmon, will transform the river and its ecosystem. Atlantic salmon are a keystone species, meaning they help to shape the environment for the benefit of themselves and other species. The presence of Atlantic salmon will also bring greater environmental protection to the river.

Before this weir removal and the creation of this fish pass, the Derbyshire Derwent only had 40km of available habitat to Atlantic salmon. This project has opened up a further 9km of habitat, so it’s clear it will have an immediate and significant impact.

The work by the Wild Trout Trust on developing and getting this project to delivery has been fantastic and the support from the local community has been exceptional.

In November 2022, the River Trent salmon run was in full flow with many local residents filming the salmon jumping at weirs along the River Trent, where we desperately need fish passes. But we know that with the recent rainfall there is extra water in the system and a lot of these fish will soon be in the Derbyshire Derwent where they can pass through the site of the Snake Lane weir for the first time in generations.

Our salmon normally spawn from the end of November to December, so this will be an interesting month or two while we try and locate this year’s spawning fish. With the removal of the weir, and the construction of the fish pass, we’re hoping that our pin-point knowledge will soon need updating.

Catchment Coordinator for Derbyshire at the Environment Agency

Further information can be found on the following links: