The first fish I caught as a boy was a small wild brown trout in the Lake District. From that moment on, I had a passion for fishing – especially for wild trout.

That passion has shaped my career and, for the past few years, my job as a Fisheries Scientist at the Environment Agency has involved working to protect wild trout stocks and support angling.

Wild brown trout face a number of threats, both natural and man-made, including pollution, extreme weather events, such as droughts, and predators, such as kingfishers, herons and mink.

One of the ways in which trout populations are able to respond to these threats is through their genes by evolving to adapt to a range of local environments over thousands of years.

By spawning at different times of the year, or in different places to maximise the survival of their offspring, wild trout can live and thrive in a variety of habitats.

We now know that this natural genetic diversity can be reduced by the introduction of farm-bred trout.

Farm-bred trout are produced with techniques that work differently from the natural selection that occurs in the wild. As a result farm-bred trout have, over a number of generations, lost some of their genetic diversity.

When farm-bred trout are introduced into rivers alongside wild populations and the two interbreed, the resulting offspring have less genetic diversity than their wild parents. This loss of genetic diversity can mean that the progeny are less well equipped to survive in the present habitat, or cope with future changes to their environment.

Growing up in a safe environment has also led to farm trout becoming more domesticated. Lacking the instinct needed to keep safe from predators, they tend not to survive very well outside of the fish farm. 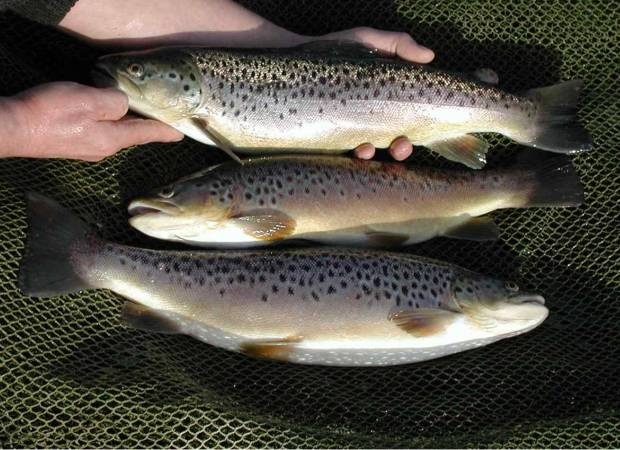 From 1 January 2015 it will not be permitted to stock rivers with fertile farmed brown trout – also known as ‘diploids'. The only brown trout that can be stocked into rivers will be sterile female ‘triploid’ trout or brown trout from breeding programmes that use locally sourced brood-stock.

I’ve been asked a few questions about triploid trout, such as ‘do triploids behave differently to wild brown trout?’ and ‘will they grow too big and predate on native stock?’ We commissioned research into various aspects of triploid trout behaviour and concluded that these trout actually performed the same and will provide anglers with equally as much sport.

Certainly in my own experience as an angler, many of the trout I have caught in the past few years have been triploids and the excitement and thrill of catching a trout is just as intense as it ever was.