Last week, in Lincolnshire, I visited the local Environment Agency incident room where staff work around the clock monitoring weather patterns and river levels so they can warn and inform communities at risk and help coordinate the emergency response. 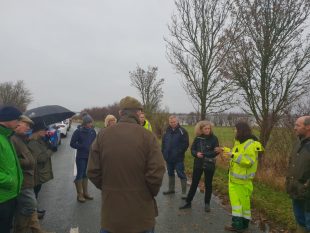 The team highlighted the incredible amount of water they were trying to manage in the Lincolnshire system, the county saw two and a half times the monthly average in September and October and some river levels were the highest ever recorded. Unfortunately, Lincolnshire is not alone, and the ground has been saturated across the country.

Most people live in towns and cities but farmers manage 70 per cent of the land. In the last two weeks, I’ve seen the devastation flooding can have on farmers. Two weeks ago, I visited farms that were still flooded in Yorkshire with the President of the National Farmers’ Union, Minette Batters. At one farm we visited, the farmhouse flooded and cattle were moved to higher ground. In Lincolnshire, I visited a chicken farm that has been completely inundated.

How countries manage flooding has always been political. As winters get wetter and sea levels rise, debate will only intensify. We’ve seen this play out in real time during the current election campaign. However, it is clear from the party manifestos there is widespread political agreement that more investment is needed in flood protection.

I emphasised the power of partnership working in Lincoln, when I spoke to local Internal Drainage Boards and NFU representatives. It’s vital everyone impacted by flooding works together to improve our resilience for the future. After the election will be a key moment to make the case to a new government about how to maximise future investments for all communities, rarely do governments come to power at a time of such heightened flood risk.

In May, we launched a draft Flood and Coastal Erosion Risk strategy that focusses on what we can do as a nation over the next 10 to 30 years to help support flood resilience for urban and rural communities up to 2100. The Committee on Climate Change recommended this strategy to Parliament in July.

In the meantime, it is essential that people remain vigilant. With the water system brim-full, ever smaller quantities of rain bring increasing flood risk over the coming winter. I urge everyone to sign up for flood warnings and find out how to prepare.