As we celebrate annual World Fish Migration Day, I am reminded that in Britain, we are incredibly lucky to have some fascinating migratory fish species. Everyone has heard the tale of the Atlantic Salmon which travels thousands of miles back to its river of birth to spawn. But how many of you are familiar with the story of a fish that was once the most important species on the river?

I am of course referring to the humble shad. This fish, which is part of the herring family and subsequently looks very similar to a herring we can all visualise, were once a cornerstone of local communities along the River Severn and sought-after across the rest of England and Europe, with their sale value exceeding that of salmon. River Severn shad were even shipped to the Empress of Russia and other nobility because of its taste and quality. In fact, the first fisheries laws were introduced to protect shad during the reign of Queen Elizabeth the first.

Today, the species is confined to just a handful of estuaries. Our only sustaining population is confined to the Bristol Channel of which the river Severn is the largest contributing river.

Unlocking the way for Shad back to the Severn

Alongside our partners in the Canal and River Trust (CRT), Severn Rivers Trust and Natural England, I am involved in an ambitious project called “Unlocking the Severn” that will see shad restored to their historical territory. It will take 5 years to complete, open up more than 250 kilometres of river and is one of the largest whole river restoration projects ever attempted.

Last month, the project celebrated a major milestone as the first of its large-scale fish passes at Bevere weir, just north of Worcester, was opened to river fish! 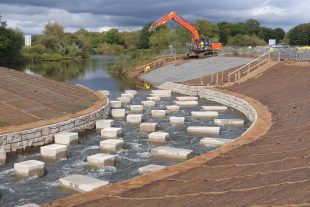 Construction on this site faced challenges from exceptional rainfall and river levels over the autumn/winter months, including the wettest February on record. With the added impact from the coronavirus pandemic, work couldn’t restart until late spring this year.

However, that didn’t put an end to progress or enthusiasm and less than four weeks ago, specialist divers cut the steel piles at the mouth of the fish pass and a temporary dam was removed. This allowed water to finally flow through the new structure which means for the first time in more than 170 years, river fish have free passage past the weir at Bevere.

This is the first of four important and innovative fish passes, being installed on the River Severn. At Bevere, the fish pass is made up of a 100m bypass channel, allowing all fish to swim up a gradually sloped channel around the weir.  The water is slowed and flow broken up through the installation of blocks at the base of the bypass channel. This creates optimal conditions that fish, such as the 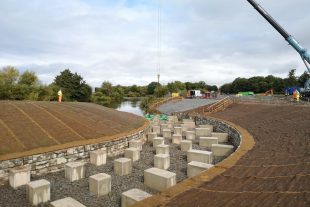 endangered twaite shad, can swim through with ease.

The next fish pass due for completion by Unlocking the Severn is at Diglis Weir, near Worcester City centre. This pass will be the biggest deep vertical slot fish pass in England and Wales and include a unique underwater viewing window to observe fish swimming through the pass. Works at Diglis are due to complete by the end of the year.

I am so proud to see this amazing project take shape. Not only will it reconnect local people with their river but it will boost biodiversity, tourism and fishing and ensures the River Severn system is protected for future generations to enjoy.

Our natural heritage is an important piece of our past, present and future. I don’t imagine it will be too long before we hear people talking once again about shad, and the amazing story this freshwater herring continues to play in the history of its great river.