The brown trout was recently voted the nation's favourite fish. Here fisheries technical officer Pete Turner talks about his work to help them thrive in Yorkshire.

Eastburn Beck, like many tributaries of the River Aire, has its problems. Over the years it’s been straightened and widened causing it to become shallow, with a lack of varying habitat such as pools or riffles.

Add to this a large number of weirs, the unmanaged woodland through which the beck flows and the signal crayfish and you’d be forgiven for thinking the beck was a lost cause. But there are trout populations in the beck, even though they have been confined to the small areas of good habitat or hiding in cracks of the walls which define the limits of the beck.

So what to do?

Well firstly, projects like this are always easier with friends so step forward the Wild Trout Trust and Yorkshire Wildlife Trust. Secondly add some support from the Aire River Trust, Forest of Bradford and the Woodland Trust. Lastly develop a plan of attack!

The most significant issue here was the impact of the weirs so this is what we tackled first. The weirs caused upstream ponding allowing fine sediment to drop out, covering the river bed and smothering the key habitats used by the trout and other fish. The weirs also prevented the natural transportation of gravel downstream ultimately depriving the River Aire, which Eastburn Beck flows into at Crosshills.

The answer to the weirs was very simple and included a sledge hammer and an angle grinder! 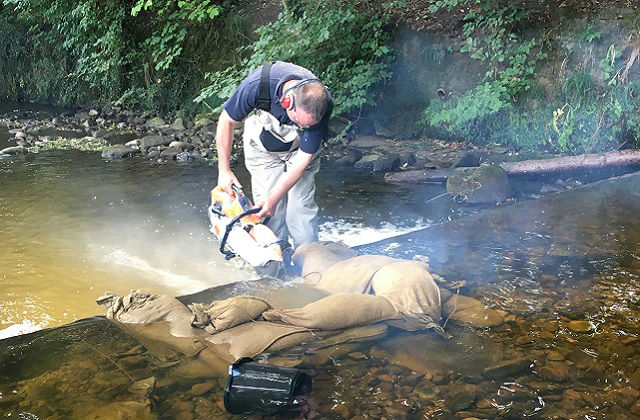 By cutting - or in some cases smashing - notches into the weirs, we created a focal point where the flows were targeted, scouring the fine sediment from the bed but also creating a deeper channel and in some cases, pools. Finally new habitat types were becoming a possibility in the beck.

By offsetting these holes we hoped to create a channel which was no longer straight and boring but was wiggly and had some variations in water depth.

Adding simple rock flow deflectors downstream of some of the weirs has added further interest by encouraging the beck to move further than it maybe wants to. 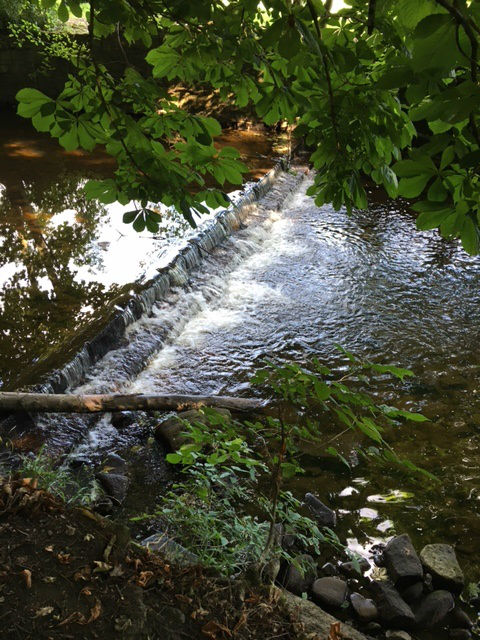 So now some of the weirs have been sorted, has it made a difference?

Three weeks after our initial work I visited the site and there are some interesting changes already taking place. The beck has clearly narrowed as the deeper, more sinuous channel starts to form. The bed has cleaned, with less sediment visible and I’m pleased to say that there were lots of trout rising to eat the bugs on the surface. 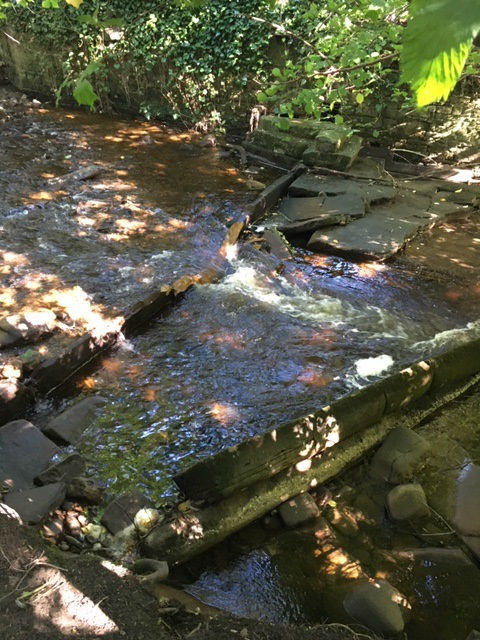 Well this involves chainsaws and a bunch of volunteers to fell some of the trees within the wood next to the beck. We’ll be using these trees as large woody material, tying them into the banks of the beck and creating perfect hidey holes for the trout and other fish. We’ll also be using the stumps to repair the eroded banks where walkers have unwittingly created pathways into the beck for sediment which is washed out from the woodland when it rains. Felling some trees will have the added benefit of opening the canopy, allowing plants to grow again on the ground where they had been previously starved of light. The root systems of these plants will act as reinforcement to the soil, stopping it being carried into the beck.

We’re not there yet but in the year that the brown trout was voted the Nation’s Favourite Fish we can feel happy that slowly but surely we’re helping to improve things for some of them at least.